Lately, I've become a fan of painting still life during the winter months. It is a super way to work on painting skills like observation, analysis, and drawing, as well as being a respite from the gloom and gray. The ability to work from life whenever I feel like it is offset only by the difficulty of figuring out what to paint in the first place.

I prefer a contemporary approach to creating still life paintings—I like working with flat lighting and everyday subject matter. While I look for interesting shapes, contours, and colors, I do prefer painting objects that have a sense of accidental or unconscious aesthetic design: I don't want to create pretty pictures by painting pretty things.

I decided that examining another artist's approach might make for an interesting blog article and help improve my own work. Since I have long admired the still life work of British artist Euan Uglow, I decided to attempt reverse-engineering one of his paintings. In doing so, I learned a lot about his painting, and something about bananas, too.

I want to be clear that I did not try to copy Uglow's painting. I set out to emulate his set up, then create my own painting of my own banana from the result. 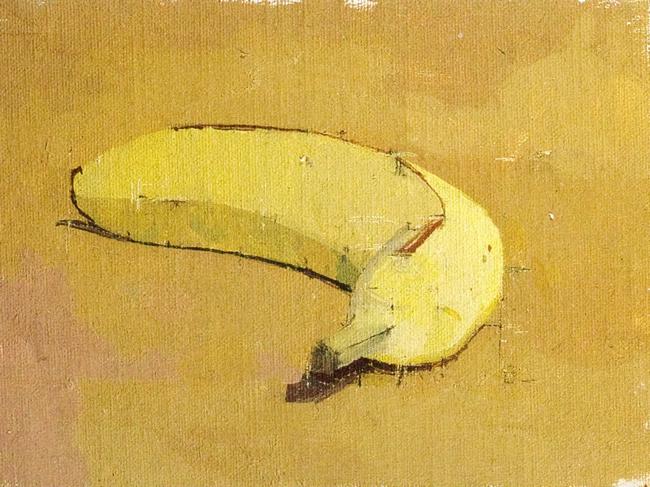 This is the painting that I decided to analyze.

A yellow banana on a yellow ochre background sets us up for a painting where everything is in the same color family (more or less), meaning all the colors are close on the color wheel. We also see some reds in the background, and the deep browns also read like dark reds. The only relief is found in the shadows on the banana where there are some colors that read as greens, and some neutral grays around the stem area.

The painting contains Uglow's usual geometric markings—thin lines that mark tangents and transition points around the edges of the subject. They were deliberately included in the final painting.

Uglow was a notoriously slow and deliberate painter and he only painted from life. It is possible that he worked on this small painting for just one or two days while the banana turned brown, but it is equally likely that he executed this painting over an extended period. I do not know how he kept his subject fresh, or whether he swapped the banana out for a new one every day or two.

One final thought on Uglow's painting: it is tiny. I found out it is 5"x7" in size after I'd finished my own painting. Why would he have used such a small canvas—perhaps so he could finish in just one or two sessions?

I started with the banana. Despite much searching I could not find a banana that looked exactly like the one that Uglow painted: all the bananas in the store (and I looked in many stores) were more tapered at both ends. One important fact I discovered is that the bananas on the inner part of a bunch have a single face on their inside curve. Bananas that grow on the outer side of a bunch have two faces. Uglow used a banana from the inside of a bunch.

In the end, I chose a banana from the dish on the kitchen table.

To re-create the surface that Uglow put the banana on (which I will hereafter refer to as a base), I took a scraped-down 11x14 panel and covered it with yellow ochre paint mixed with a little white. I used cold wax medium so that it would dry quickly and have a matte sheen.

For a light source I used an artist's clamp lamp with a 7W 6000K LED bulb (you can find a clamp lamp for less than $10 on Amazon or at most hardware stores). I chose the bulb primarily for its white light but switching between this and a 5000K bulb (much easier to find in a store) did not make any appreciable difference.

First Attempts at Set Up

Armed with a banana, a base, and a light, I was now able to try out the set up. 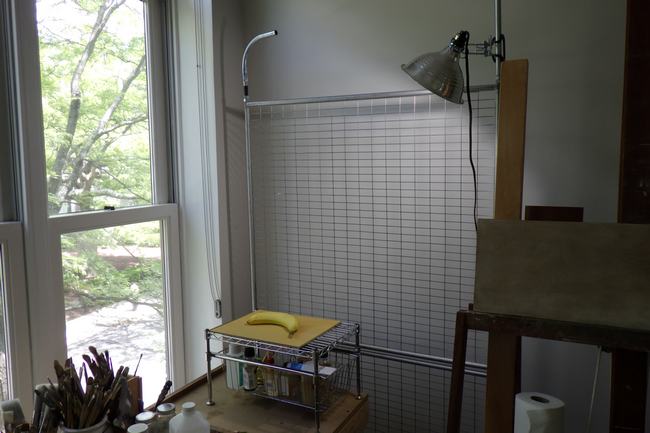 I started by resting the base on my taboret so that it was easy to see from my easel and put it above table level by using a wire rack to raise it up. A pile of books or a stiff cardboard box would have been equally as good for this purpose.

My first guess for the location of the light source was to place it high and to the right of the setting.

[Regarding the choice of location for the still life: I find it easier to paint when it is on the side of my easel opposite my dominant hand, but light and studio space always have a say in choosing the best spot. On the other side of my easel, there are obstructions in the way of the window light, and these make it difficult to put artificial light in place. There is also plenty of room behind me (in front of the easel), so I wouldn't hesitate to turn my easel around and work in that direction if needed.]

When standing at my easel, neither my perspective on the banana nor the position of the shadows matched those of Uglow's painting. I decided the banana needed to be higher and the light needed to be in a different position. 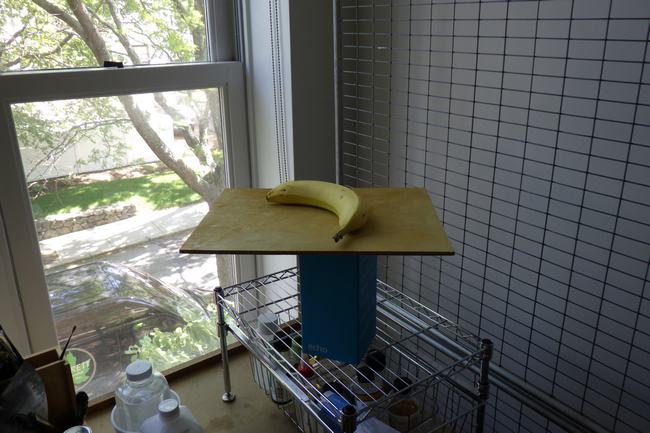 After finding the right height, I also oriented the panel so I'm looking along the long axis.

I raised the height by placing a tall box underneath the base so that the banana was approximately sixteen inches below my eye level, at which point I decided it looked right. As soon as I saw the still life in this position, I realized that Uglow must have painted sitting down (which I do not).

The shadows in Uglow's painting are extremely interesting in the sense that they barely exist. They are the painter's equivalent of putting a sprig of parsley on a dish at a restaurant. As soon as I truly looked at them, I realized that Uglow had done something unusual with the light. 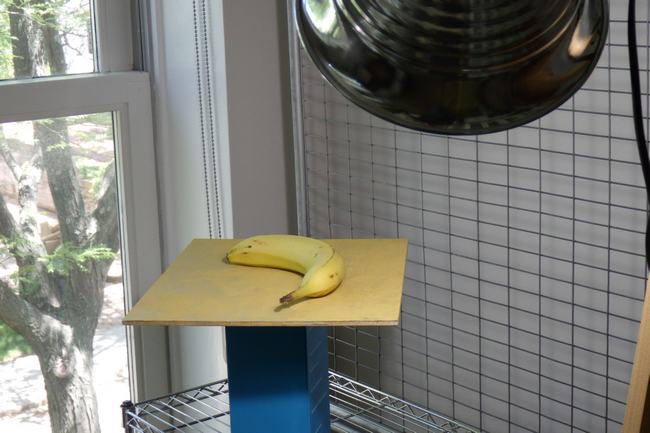 The right position for the light is found

I tried the lamp in all the usual spots—to the side, high and right, even above the banana—but I could only replicate Uglow's shadow pattern with the light at eye level to the right side of my face, directly above my right shoulder. After finding the right location for it, I held it in place by clamping the lamp to a stretcher bar that was, in turn, clamped to my easel. 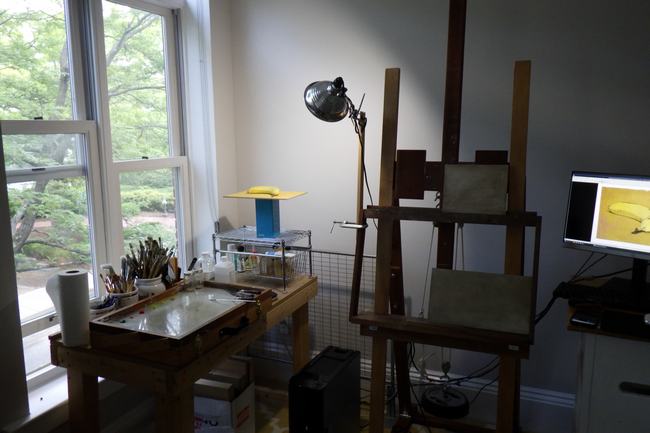 My home-made easel comes to the rescue

You do not need to purchase a specialty tripod on which to mount your light (awesome if you have one, though) but finding something to mount a light on in this position could be tricky. My easel is sturdy and tall enough that I can clip a light to it, although it has the drawback of only allowing a small range of angles and distances from the subject.

To better replicate Uglow's flat light, I left the studio window unscreened so that the banana was weakly illuminated from the left and placed a reflective white cardboard panel behind the set up (which evened out light on the outermost face of the banana). 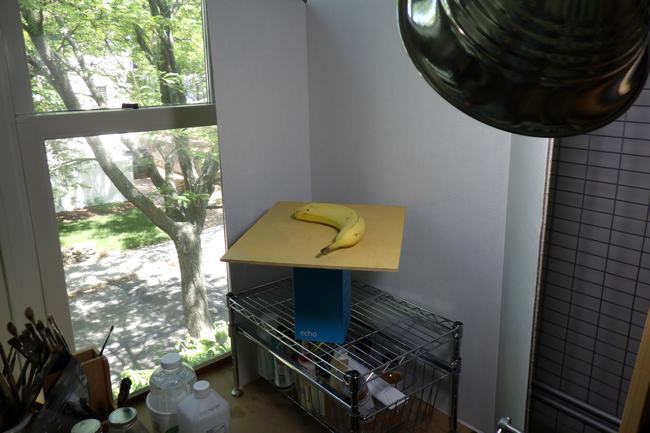 The still life set up as viewed from the painting position. Note how the light is near my line of sight.

While I do not know how Uglow achieved this lighting for his own painting, it is safe to say that this is not the kind of lighting you will find illuminating a bunch of flowers in a painting workshop or still life class: I could not have stumbled upon this lighting accidentally in my studio. 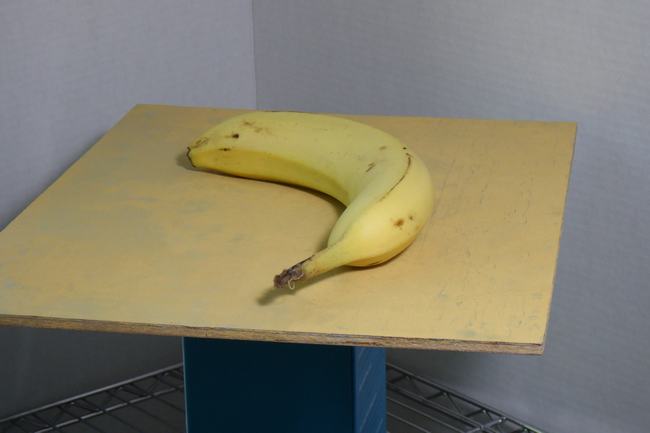 The lighting reveals the subject in the same way as if you had gone looking for it with a flashlight.

Standing at my easel I have a view of the still life subject that is close to the one Uglow must have painted from. Although the shadows are not an exact match, I am inclined to think that this is a result of him using artistic license.

When you paint perishable items, there is a tendency to rush. This causes all sorts of problems, not least of which is the tendency to build on top of drawing errors.

That's why it took several attempts to create my own painting. 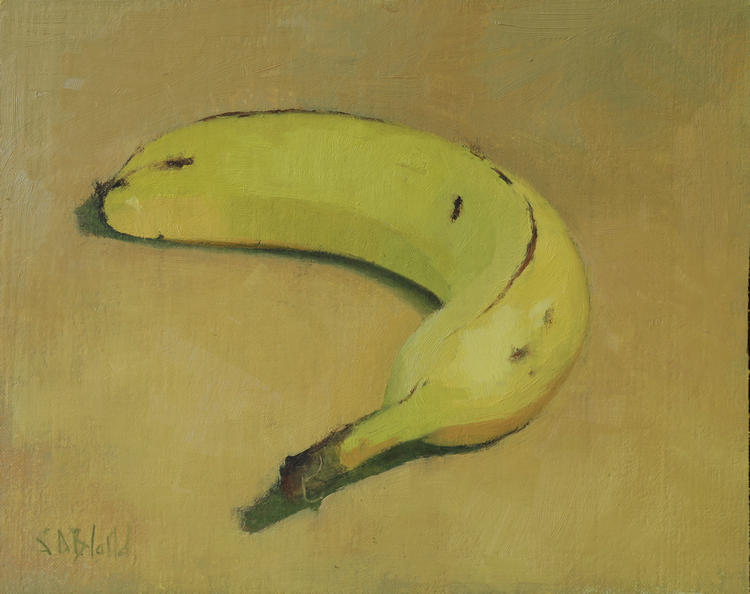