At the start of spring my studio went quiet. We moved house (within the same Seattle neighborhood) and spent most of the last two months packing and unpacking, pitching unwanted stuff, and setting up the new place.

The break from painting came just when I needed it most. I find it difficult to be creative in winter, even at the best of times, but I had started to feel that my ideas were at risk of getting stale. Getting some distance from the studio has helped immensely. 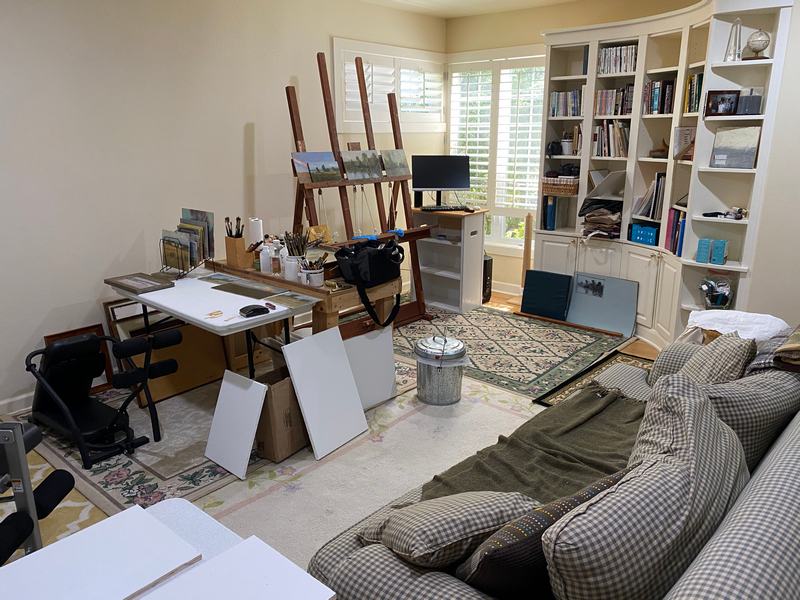 A look at the studio. Great light, plenty of storage space and a sofa (for the dog).

The studio is something of an upgrade—I could barely fit a chair in the old one, let alone a sofa— and now I have tall ceilings and windows at both ends that look out onto the garden.

I'm already working on some new stuff, but until it's ready to show here are some paintings that were completed earlier this year: 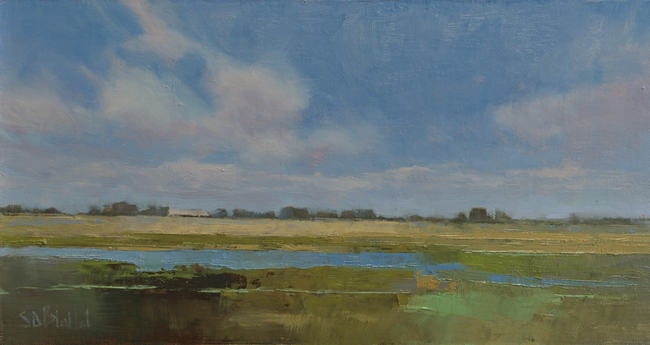 I went on a virtual journey through the Canadian farmlands on Google Maps. Mile after mile of monotonous landscape then, suddenly, I see a bit of flooding near the roadside and the whole thing comes to life. I couldn't pass up the chance to paint this.

There are two challenges, I think, in painting from street view images: firstly, the wide-angle lenses make everything appear further away than it really is; secondly, the images are always taken from the road which creates a feeling of seeing the landscape from the outside rather than being immersed in it.

On the other hand, there's a vast array of images available and you will have no problem finding something that takes your interest. 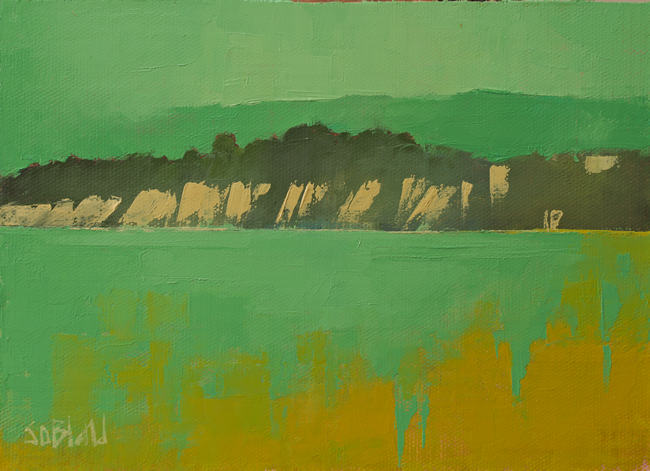 I've been trying to paint the cliffs on this stretch of the California coast for the past three years, ever since we took a vacation in Santa Barbara. I struggled to balance all the things that compete for attention in the scene—it's so difficult to paint with the goal of trying to do "just enough". To make it even harder, I'd only taken photos with an old iPhone and the pictures were rather poor.

I arrived at this painting after trying lots of other approaches that didn't work. To create this one, I reduced the number of values to about four. Then I left out an astounding amount of detail so that every element is now just a suggestion rather than an explicit rendering. I used a palette knife to paint the cliffs directly into the existing wet paint so that each block was done in a single stroke.

Using a yellow/green color scheme instead of a blue-dominant one also helped me to render the scene in a more abstract way.

The funny thing is that this started out as something completely different—a roadside barn I'd found on Google maps. While doing the layout, I decided it didn't work at all. After scraping everything back, I added a different sky, took out the barn, pushed the horizon back and changed the time of day. All of that happened over a couple of weeks as the ideas fermented in my mind.

Eventually, I turned the whole painting around so that it became a simple landscape built around one cloud in the sky. Not at all what I'd envisaged when I started, but a lovely place at which to end.