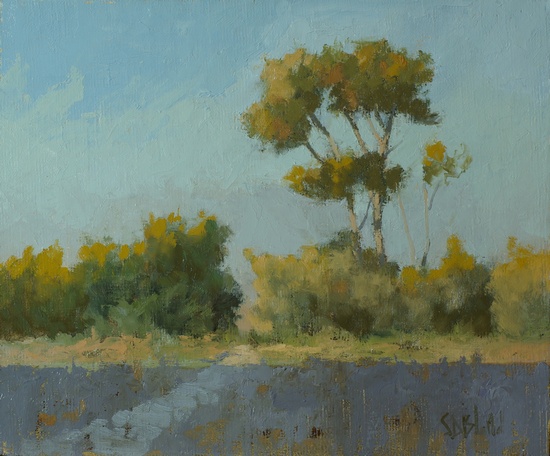 I took advantage of the nice weather this week to get in a spot of plein air painting. It's been a month or two since I last did any work outside and I was starting to get the itch.

After so long in the studio, my gear felt extra heavy. I took a short stroll from where I parked my car to the painting spot - about half a mile.

Single tree compositions like this usually do me in, as it's easy to over-work the tree in an attempt to make it interesting. To try and avoid this, I simplified the shape as much as I could and eliminated a few unnecessary details.

However, when I revisited the painting the next morning it didn't hold up to scrutiny with fresh eyes. I decided to re-work some parts of the painting to produce a better feeling of light and shadow. This was actually much easier than it might appear because the drawing is largely unchanged.