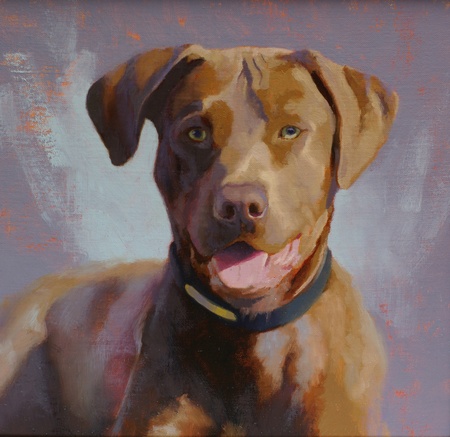 This recent commission was based on some reference photos that I'd taken back in 2008. Sadly, Chester passed away unexpectedly this year.

I painted the portrait at the same time I was working on another, and having both in the studio at the same time led to some cross-fertilization of ideas between the two paintings. For example, the backgrounds have a similar design.

In the reference photos Chester was laying in grass, so I had a bit of work to do to change most of the colors in the shadow areas where the reflected light was green. I also introduced some of the background color into the shadow areas to make the picture look like a more integrated whole.

I used a gradated background to bring the viewer’s attention to the center of interest. The rapid value transition is reinforced by a corresponding warm/cool temperature shift. In places the toned canvas and under painting has been allowed to bleed through to add warmth to the blue/purple. The net result is an incredibly strong focus on Chester’s head. It’s difficult to look at this painting and not stare directly at his nose.