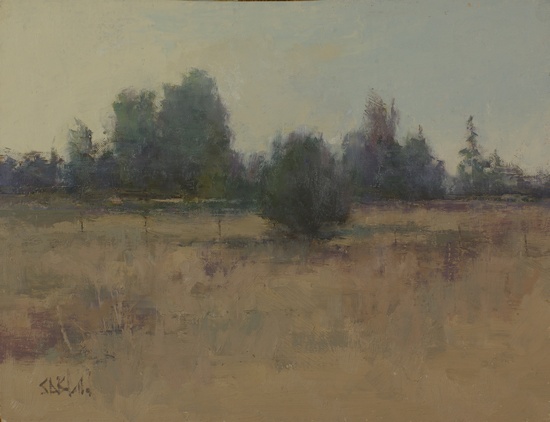 It was one of those weeks when I take two steps forward and one step back; this painting took more than three restarts before it began to emerge. It took me a long time to figure out that it was all about texture and small color shifts.

It's based on a small plein air study done earlier in the year (when the colors were brighter and greener); I wanted to recreate the scene as it looks after the summer drought. As usual I took a lot of artistic license with the composition, adding things like the fence posts and removing a few trees.

The biggest change I made was to transpose all the colors slightly from reality. Everything in the foreground and middle distance contains more red than was actually present. The idea was to tone down the saturated greens and yellows, and, in doing so, try to convey a feeling of tranquility and isolation.

Changes to the painting are ongoing.