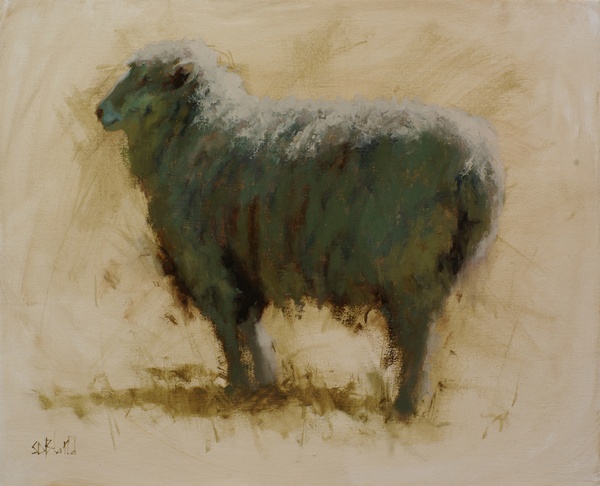 Firstly, I should be honest and say that I finished painting Eros on New Year's Eve but since I'm unveiling the painting today I'm calling it a 2015 painting.  The benefit of this, of course, is that I can convince myself that I'm getting off to a very productive start in 2015, even though I'm not planning on doing any real work today (unless you call repairing a shower faucet work?).

I did a painting of this ram's head back in June 2014 and sold it on the Western Loudoun Artist Studio Tour weekend and I've been planning to do this painting ever since, but lacked the time.

I painted this by first massing in the the ram's body and, after that was dry, painting in the opaque colors very loosely and without any blending except for a few palette knife strokes.

This is a milestone painting in that it's the first time I've worked on a fully self-prepared linen. I sized and primed the linen myself on an 8 ft by 4 ft frame that I built from a few 2 x 4's and some scrap materials. This is a Blick medium portrait grade (8.85 oz) linen and I think it's one of the best surfaces I've ever painted on.