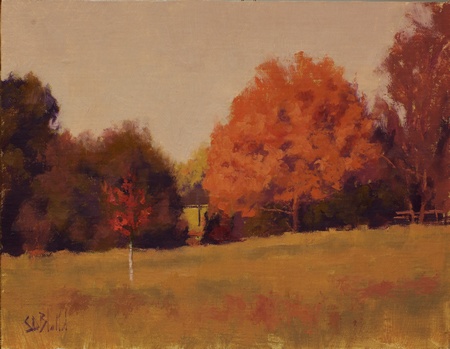 In this painting I tried to capture the sense of fall by mixing all the colors with reds, oranges and yellows. The palette is phthalo blue, alizarin permanent, cad orange and cad yellow medium.

This was based on some photos I took during a paint-out session at Oakland Green in Lincoln, VA. The week before I had done a nice plein air work, so I spent the second visit taking reference shots of the farm for later use.

An interesting note on phthalo blue (which I cannot pronounce, by the way), from Wikipedia: Industrial production was of the order of 10,000 tonnes pa in the 1980–90s in Japan alone.