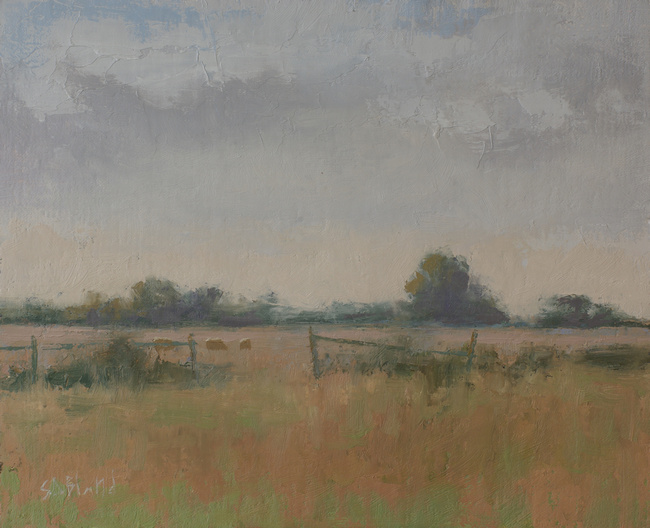 Continuing on with the theme of rescuing old paintings, this one has come close to going in the garbage can more than once. The painting is one of a handful I have left from Virginia so I was reluctant to let it go without first trying to fix it up.
The original version was done on location on a overcast fall day (I have a distinct memory of the sound of walnuts falling on a metal roof while I painted). It had been left in a corner of the studio for a while because I never felt it was good enough to sell. I decided to see if it could be salvaged.
Looking at the painting two years later it was obvious that I had tried to make too much out of it. The sky was fairly well done, but the landscape was a green and brown mess which lacked any real design.
I decided to leave most of the sky unchanged and replace all the foliage and ground. I sanded off the old paint from the bottom half of the panel.
Rather than work from any of the photos I'd taken that day, I used studies of other landscapes as a reference for the new parts. As a result the painting isn't of the same exact landscape, but it does resemble other views at the farm.
As in my previous post I made the foliage much smaller and pushed it back in the picture.
After all that, the painting was still missing something. After putting it to one side for a while, I decided to add a few sheep near the broken gate to give a bit of interest.