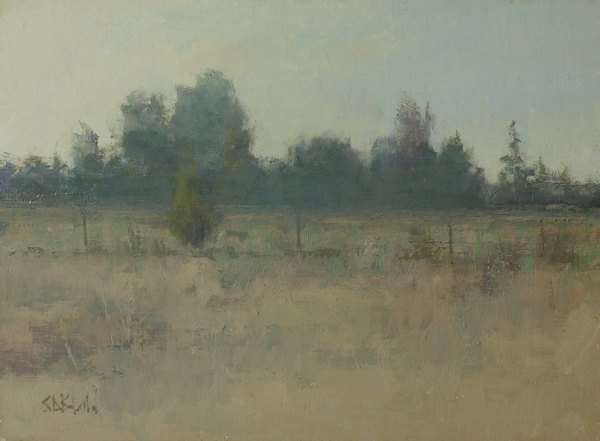 This painting was started last year when the effects of the summer drought showed in the dry grasses. The original version is here.

I've made a lot of revisions to this work since then. I pushed and pulled the foliage around. I added texture. I pushed the trees into the far distance. Yet the painting always lacked something, and the image failed to coalesce around a single element. In a final push to bring the painting to a marketable state I decided to move the center of interest.

In this case the abstract idea of the painting is supposed to be the way the light looks as it comes across the landscape, the center of interest is the shrub in the foreground.

In this version I moved the existing center of interest to the left side and away from the middle. The fix was trivial, but it improved the painting a little. I also added a suggestion of a fence line to either side of the center of interest (you may have noticed that I'm very fond of fence posts in landscape paintings).

Sadly, all this effort wasn't enough to save the painting—the problem went deeper than the center of interest. Having decided that it wasn't good enough to make to sell in an upcoming show, I cut my losses and scraped off the panel so it could be re-used for something better.

I liked the sky, the treeline and the foreground (before I started messing around with it). Unfortunately, I didn't like the three in combination and there didn't appear to be a way to fix that without substantial re-painting of the whole. It made more sense to start over.