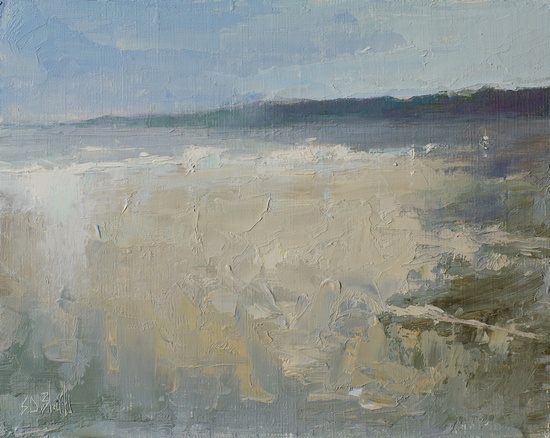 Back in May of this year I painted on location at Carkeek Park in Seattle. Although the day was really pleasant and there was no time pressure, I wasn't able to get the painting to a place where I was truly happy with it. After a few hours of effort on the sand I took the sketch home and promptly left it for dead in the studio.

With most plein air paintings that would be that; the painting would be placed on a shelf to dry, passed over, and finally consigned to the reject pile. The very bad ones go straight in the trash can. But for some reason I was not able to let this one go; over the past six months I've occasionally taken it from the scrap pile, dusted it off, and toyed with changes. This week I finally managed to finish it.

Most of the changes I made back in the studio were meant to transform what was a pedestrian painting into something more artistic. One of the main ways I tried to do this was to break down the dividing lines between individual masses to create a better feeling of unity (the shoreline, for example).

As I've done with other paintings, the actual colors of Puget Sound have been translated into something that's more manageable in paint. This geographical area is impossibly blue and I've never been able to capture the chroma faithfully. The rendering of the beach, too, is an interpretation of the texture of pebbles and sand that defies realistic painting in its natural state.