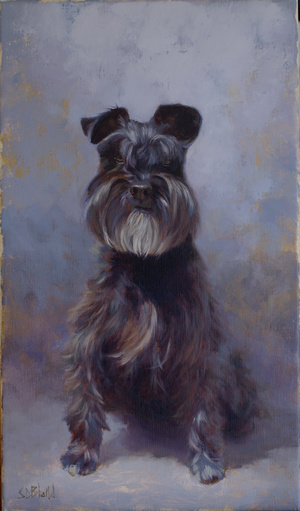 I knew as soon as I had finished taking some photographs of him how I would approach the painting of Zeke (at least as far the background was concerned) and finding the right canvas size was straighforward once I did a couple of small sketches.  Putting all that into practice, however, proved to be a serious undertaking.

Despite starting with the usual sketches, value studies and color studies I actually ended up painting Zeke twice and this is the second version.  The first time around I didn't have the greys in the coat down correctly and when I went to put in a background I was left with a muddy Zeke adrift in a sea of mud.  Rather than trying to amend what I had already painted I elected to start again from scratch.

In this version of the painting I worked on the painting as an integrated whole, trying to develop the background and figure at the same time so that the painting looked like a unity.  Finding the right combination of colors with the flexibility to serve as both the grey in his coat and as the primary background color was time consuming but as soon as I found one that worked the rest was straightforward.