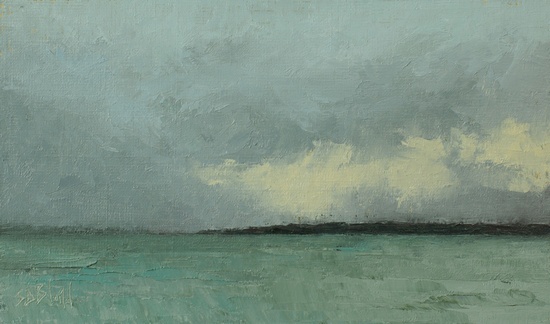 As the pile of sketches in my studio can attest, trying to paint the Puget Sound in winter is a recipe for failure. Studio or plein air, it's especially hard to do because there's so little to actually build a painting around. The only thing that breaks the monotony of this vast expanse is a break in the clouds or a hint of light showing though. When that happens it feels like magic.

Down at the beach the other day I was drawn to the rain in the distance and the big swirl of dark clouds from which it came. The edge of the rain looked like it was right over the town of Winslow on Bainbridge Island. There was a lighter patch to the right which made a nice contrast. I made a charcoal sketch on location then worked on this back in the studio.

The viridian/red/cad yellow light palette is fairly difficult to use (in terms of getting the colors right), but it's very effective at allowing for temperature shifts in the big masses. I decided to paint the sea as a series of patches of different value and temperature because there wasn't much room on this small panel to suggest waves. I'm glad that I did it this way: it gives a hint of interesting possibilities for future work.