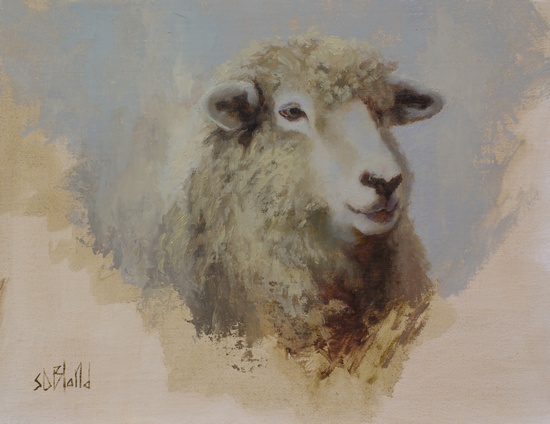 I painted this sheep from using some photos taken at Weatherlea Farm in Lovettsville as a reference. I played around with a design with pencil on paper and then with paint on a scrap of canvas before committing to the portrait.

I used a simple palette of ultramarine blue and raw umber (both Lefranc and Grumbacher), yellow ochre and a little red for some areas of the face.

The sheep was actually standing next to a red barn when I took the photo, but I elected to leave that out and instead focus on creating an atmospheric look for the painting.

This painting will be for sale at Loudoun Sketch Club's fall show at Hillsborough Vineyards in Hillsboro, VA starting 22nd November.  Update: The painting sold before the show was hung, however I have other paintings available.