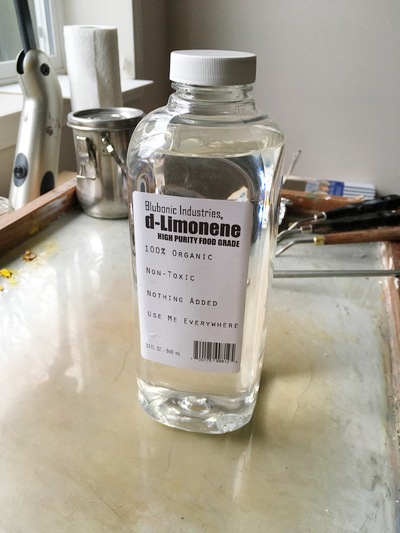 This 32oz bottle of d-limonene costs about $34 on Amazon.com

In early January I came to the realization that I couldn't go on using petroleum-derived solvents like odorless mineral spirits (OMS) in my studio. Even Gamsol and other highly refined versions of OMS proved to be strong eye irritants for me (mine are unusually sensitive), and regular low-odor mineral spirits were making me feel ill. Painting outdoors or with the windows wide open in summer isn't a problem, but in the winter months when the window is open just a crack it isn't possible to properly vent any fumes.

After doing some research I started using d-limonene (orange oil) to thin my paint and make my mediums.

I found a 32oz container manufactured by Blubonic Industries on Amazon for $34—about three times the cost of OMS from the hardware store, and about two times the cost of a quality OMS from an art supplier—but you can also buy it from other suppliers in larger quantities.

D-limonene is a terpene, a type of naturally occurring solvent. It's extracted from (and smells like) the rinds of oranges.

In terms of safety, the information available is mixed and depends on the context in which the product is being used. As a food and cosmetic additive, a NIH study found it to be safe and non-carcinogenic. However, it should, like any other oil painting solvent, be handled with caution.

I tend to use it in much smaller quantities than I ever used OMS, and I wear gloves while painting or handling it or any mediums that contain it.

Be especially aware that it is flammable and has a low flashpoint which means that it is unsuitable for using in a brush washing pot. I decant a small quantity into a tiny jar with a lid and dip my brush in it to clean off excess paint. When not in immediate use, I always keep the lid on.

Having tried different grades of d-limonene, I would recommend using either food grade or artist's grade. The grade of d-limonene which is marketed as a cleaning product has a harsher odor and is much less pleasant.

Lavender oil (also known as oil of spike) is also a suitable alternative that's also available in bulk on Amazon. It's more expensive than d-limonene—about $40 for a 16oz bottle—but it might be worth it to change the studio odor occasionally.

This article was updated in March 2022.