When I see big waves crashing against rocks and sandy beaches in soft light, I immediately have an artistic response to it. So, on moving to Seattle, I was excited to be in an environment that had so many opportunities to paint views over water.

That was until I learned how different it is compared to painting the fields of rural Virginia. My early plein air attempts on Puget Sound were so unsuccessful that I nearly gave up on seascapes altogether.

At first it felt like I was stumbling around in a dark room, always bumping into the furniture. Only when I began to learn some of the things that are unique to painting seascapes did it feel like I had found a light switch. In this article I have tried to explain the main ideas that have shaped my recent work.

Of course, this is just my own opinion, and it is based on my experiences with Puget Sound. But if you find yourself on vacation at the beach and are tempted to paint the ocean views, you might find these three things help you to avoid stubbing your toes:

While there is usually enough going on in most landscapes to proof them against less-than-ideal weather and poor light, the seascape is a fickle creature. There are no big shapes like trees or mountains to lean on and, if the conditions are slightly off, it can be difficult to create a good painting.

When I first started painting in Seattle I did not know when the sea would be at its best. I tried to paint on rainy days in winter when there was no light; I tried to paint in the middle of summer under a cloudless sky when the sea was calm. Conditions like these immediately put me in the situation of trying to "pretty up" every scene and make it look more interesting than it really was.

Eventually, I had to accept that by walking onto the beach at some random time I was unlikely to find the makings of even a mediocre painting. I needed to learn when the weather, times of day and tides would align to create the perfect conditions.

It took me a long time to discover that morning light at low tide on windy spring day is the best time for a painter to visit the Seattle beaches. North wind provides the biggest wave action at the south end of Puget Sound. Winds from the west and south (which are prevalent in the winter months) do not have enough sea room to generate large waves.

Now that I know when to head out, I have much more success in finding things to paint and do not have to rely on trying to conjure up better images from poor reference material. When I make it to the beach, I try to take lots of reference photos. Because the sea is always moving, each photo is different from the last. 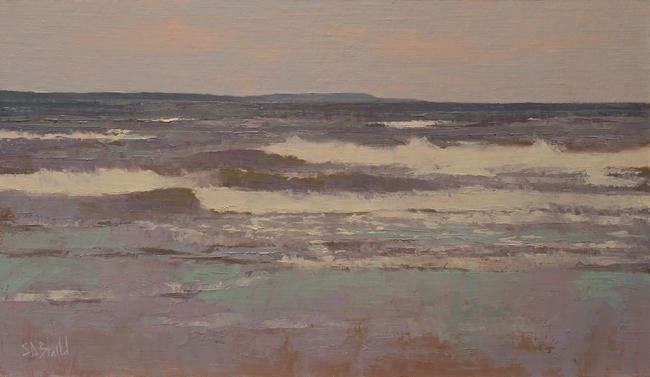 2. Seascapes Have a Color Problem

Just as landscapes often suffer from being too green, seascapes have a problem when it comes to blue. Even in the gray days of winter it permeates the sky and the water.

This can be hard to work around. Since blue is a primary color, you only have as many shades of it in your palette as the number of tubes you are willing to carry. For me that means chromatic black, ultramarine, and radiant blue.

With such a limited palette, I found it difficult to create much variation in the water's surface, especially when I tried to use loads of saturated color.

This required a two-part solution: in addition to reducing the overall color saturation, I reduced the amount of blue in my seascapes. I did this by transposing all the colors on the color wheel about one half color step clockwise or counterclockwise. That means the blues are pushed towards the purples or pulled back into the greens.

With reduced saturation and an altered palette, I was able to use landscape techniques to create a more believable seascape. I can mix many more purples and greens than I can shades of blue so I could better use value, color, and temperature variation to give perspective. Broken color seemed to work well in the foreground because it helped to describe the fragmented surface of the water. 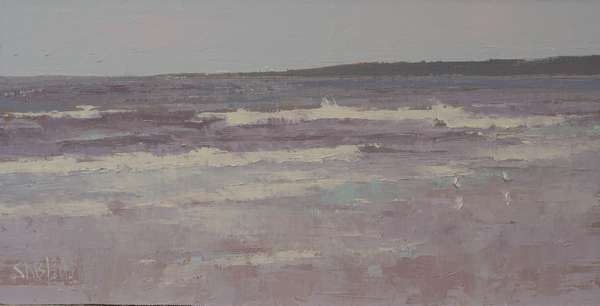 3. The Sea is Always Moving

With practice, seascapes are not any more difficult to paint than a landscape, but I find the constant movement of the ocean's surface to be a considerable problem.

The plein air seascape is entirely an invention—there is no way to paint it "as is" because it changes so much from one second to the next.

Working from photographs in the studio, you have the reverse situation: the sea in the picture is static, when the actual sea was in motion.

However, there are lots of ways to overcome these problems. My technique is to paint the unbroken waves as static (more hard edges, better definition) and paint the crested waves in motion (softer edges, looser definition). I do not hesitate to exaggerate the waves for effect.

Each of the paintings in this article was done with a painting knife using firm, controlled strokes wherever possible (although some of the freshness of the paint application was lost as I pushed things around). All the paint was applied wet-in-wet.

On a final note, it is worth mentioning that I like to use wide canvases for seascape paintings. They help me to choose between composing a painting so that it is dominated by either the sky or the sea and, most importantly, they allow enough room to let the wave forms develop from edge-to-edge.

Narrower formats make things look more static and they restrict your ability to show the wave motion. However, they seem like a better choice if you want to focus on the beach rather than the water.

This article was updated and edited for content in March 2020. It was published in the Loudoun Sketch Club newsletter (April 2020 edition) and in the Australian Society of Marine Artists newsletter (March/April 2022).