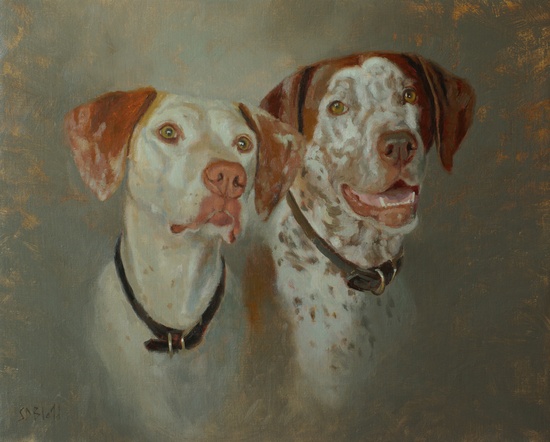 Here's a look at the latest portrait that I'm just finishing. It was originally intended to be a sketch, but all the ideas that I worked on in the design stage eventually coalesced into this more finished affair.

The reference photos were taken inside with a cool light that came from the sky over Puget Sound. This gave it a little bit of a greenish cast, which I tried to build on and work into the grays. It was altogether different from the Virginia light I'm used to dealing with.

It's always a challenge to compose and arrange multiple subject portraits on the canvas (I photographed the dogs separately, as usual). The photos that I had originally wanted to use for Tater (on the left) didn't work when I tried to put the two together - slight variations in the direction of the light and geometry of their bodies made them look awkward. I sketched out variations of the design using other photos I'd taken until I found a composition that worked.