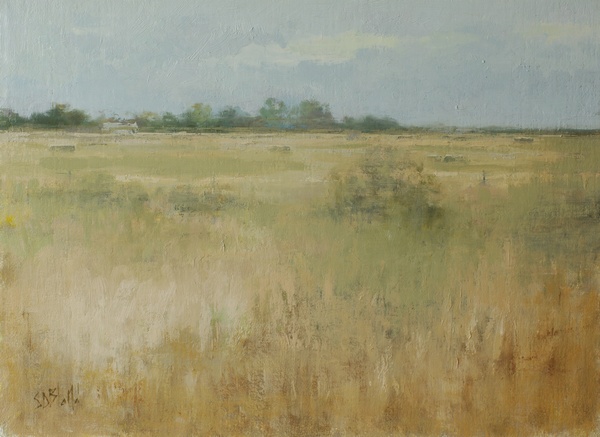 In the studio I generate more than my fair share of paintings that fail to live up to my original vision. More than 30% of my output ends up in a scrap pile.

I occasionally go through this discarded work to see what can be salvaged. In most cases I end up reusing the canvases and starting over, but sometimes it feels like a painting can be worth fixing. This is one of those.

The field that originally inspired the painting lies across the road from a winery in Virginia. It's hidden from view as you drive past and only visible if you pull to the side of the road, get out of the car and step over an old cattle grid. Even then you have to stand in the long grass to really appreciate it. That feeling of discovery was one of the main reasons I wanted to paint this scene.

What seemed like an easy thing to paint became a two year odyssey of missteps and blind alleys as it exposed, one by one, weaknesses in the original composition, my technique and my design vision.

By now the painting has gone through so many revisions that it actually looks more like another field, one that's just up the road from the original. It has been altered at least 8 times and has transformed into a different place. The most recent prior version is here.

The changes are too long to list in full, but they include things like removing trees, moving the treeline, simplifying the palette and painting in a more abstract manner.

But the single biggest change of all was that I stopped seeing the subject of painting as being a field. Instead I started to regard it as a space filled with distant air and light.

Once I did that, many of the design decisions became easier to make—they were no longer driven by a manipulation of elements to create a tableau, instead they became motivated by the need to evoke the feeling of the space.

And that's why this painting, more than any other, made me change the way I think about landscapes.