Here we are at the start of a new year, and I thought I would post a few things that I've been working on recently.

Thanks to COVID, I am no longer under the pressure of creating artwork for shows and I have found myself taking more time to work on some of my paintings. I don't mean that I have become a perfectionist or that I'm trying to take them to a higher degree of complexity, but I think I have been myself asking more of my efforts.

This practice is sometimes problematic. I have worked some paintings to death where a lighter touch and a willingness to stop would have prevented ruin, and I have often kept working where I needed to step back and re-think a design. But these are all normal things in the life of an artist, and I try to take them in my stride.

These three new paintings are each a survivor of the journey from bare canvas to a finished work after suffering multiple trips to the easel. 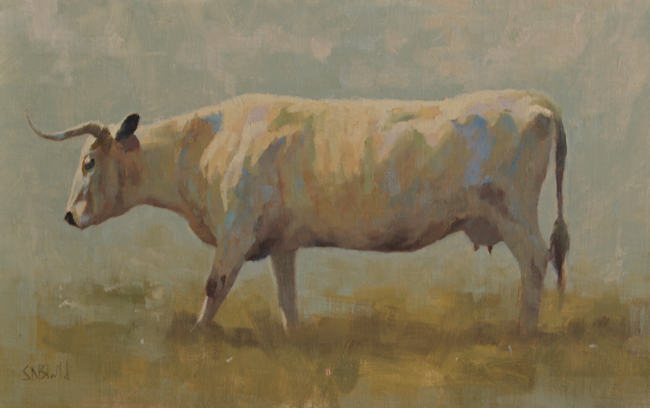 The inspiration for this painting came from Joseph Crawhall's (Landscape with Cattle, ca. 1885). He is one of my favorite artists, but his work sometimes gets lost in the cracks between the Victorian greats and the early modernists.

What sets his work apart from his contemporaries (and from many of those who came after him) is the lack of sentimentality in his treatment of the subject matter. His paintings are often done with a brevity of hand that belies his perfectionism. It makes much of his work feel contemporary.

In this painting, I mimicked Crawhall's impressionism, but I treated the cow's hide as a separate, smaller canvas inside the border of the panel—almost like a painting within a painting. 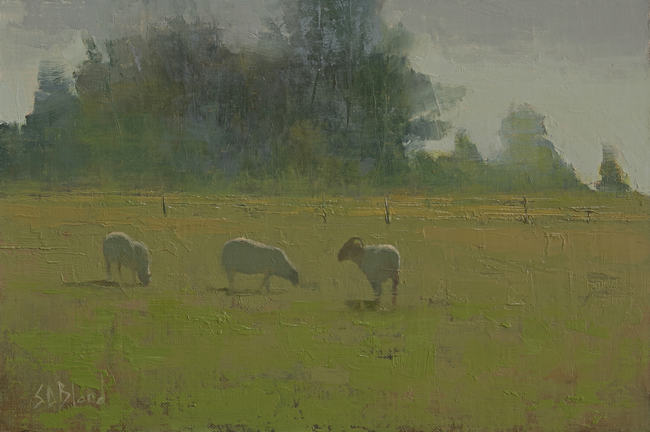 This painting is a re-worked version of an abstract landscape which had gone unsold for several shows. I thought the trees were worth saving, so I completely repainted the bottom half, added sheep and built up the paint texture in the foreground.

Unlike the cow, this is a tonal painting and is dominated by the greens in the palette. The greens have been carried through into the sheep's fleeces. 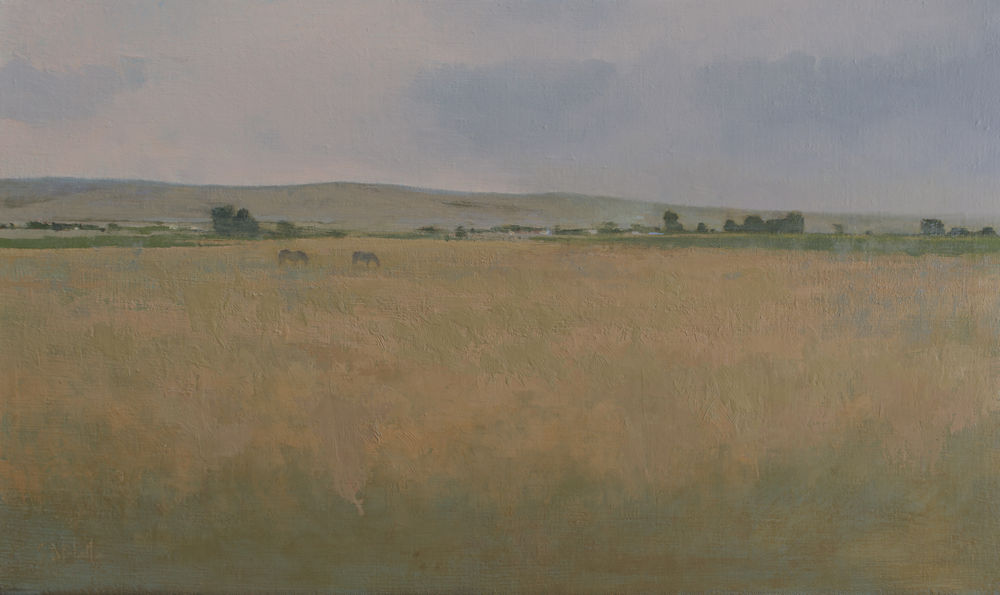 The final painting has undergone more revisions than most. I keep thinking I have reached the end, but on posting it to my blog, I discover something that I missed in the studio. This time, I'm calling it done.

I loved the idea of this wide-open field on the edge of the steppe where all the interest is in the distance, close to the limit at which it is out of sight. It reminded me of the landscape imagery in the Gerald Murnane novel, "The Plains" (which is where I stole the title from, by the way).

The hardest part of the painting, by far, was the horses. Even though they are tiny, they took days to finish. Not just the drawing, but the positioning, poses and the layering of the paint to make them blend in with the grasses. The ones you see here are the fourth or fifth versions that have appeared on this canvas.

Since this is a larger painting, I've posted a better-quality image than usual to give you an idea of how I built up the layers of paint.