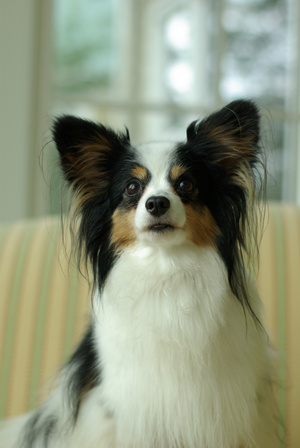 The biggest limitations to using a customer's own photos as a reference for a portrait painting are usually quantity and quality.

Since I often find myself in the situation of having to push back on my customers to provide me with better photographs, here are some suggestions for taking better shots of your favorite family members.

The goal is to take photos of the dog that look as close as possible to the way they will appear in a portrait. It's impossible for artists to create a likeness from imagination.

The first priority is to try and get everyone as calm as possible with few distractions. Dogs in particular need to be kept calm so they don't overheat and pant. When taking this photo I was at the customer's home for about 30 minutes before I started working with the camera, giving everyone (including me) some time to settle down.

The next priority is to get good lighting in a good setting. This does way more to improve a photograph than any amount of money spent on a camera and lens system.

I took the above photo in the customer's sun room on a cloudy day. We moved furniture around until the sofa was right next to the window in order to maximize the available light and made sure all the room lights were turned off.

I often move things around, including in my own home when I want to take photos of my own dogs. Don't settle for poor photographs because you can't spend two minutes moving a sofa.

By the way, I never, ever use the built-in camera flash or take photos at night by the light of a table lamp.

Use the right lens

For taking photographs inside I use a fast 50mm prime lens. Outside, I use a 70-300mm variable zoom which is a fairly slow lens, but there's usually more light to work with and it lets me stand far away from my subject.  My camera is an older-model 10MP digital SLR.

Even a few years ago I would have cringed at the thought of using cellphone pictures as the reference for a painting. Now they're getting to the point where the quality is often good enough.

However, cell phone cameras (even on current generation models) usually have lots of lens distortion and poor low light performance. The easiest way to check if a photo has the right quality is to zoom in so that the dog's face fills the cellphone screen. If you can make everything out it's probably OK.

Get the right exposure

To capture this dog's colors I had to push the exposure up so that the whites were just starting to blow out. I tried several test shots to get the right exposure setting. If I'd left exposure up to the camera the photo would be too dark to be useful.

To get this photo I sat on the floor and had the dog sitting on a sofa. Getting the camera close to the subject's eye level makes for better portrait-type pictures. I also tried shots with the camera in different orientations.

This is a reference photo for a formal portrait. If you want something more relaxed it's OK to have the dog moving around while you follow along, camera in hand, snapping away. Just get down to the dog's level.

The most common mistake that people make is to stand over the dog taking pictures.

There were three people involved in taking this photo.  Me with the camera, a person sitting next to the dog to keep it in place (and whose light colored shirt accidentally worked as a light reflector) and a person standing behind and to the left of me holding hot dogs to get the dog's attention.

The last and most important rule for getting a good photograph, I think, is to take lots of shots.

I learned this lesson by watching professional photographers doing photo shoots of my wife for articles about her in People Magazine and her college alumna magazine. They both kept going well past the point where I (at that time) would have stopped.

Some photographers who use large format film cameras don't have that option and have to have a sixth sense of when to press the shutter. With modern digital technology there is basically no limit to the number of pictures that can be taken, so you should keep at it until you know you have a great shot. Then take some more.  On a photo shoot I usually take between 100 and 200 photographs in order to get a few images that might be good to use as the basis for a painting.

There's always one shot that stands out from all the others.